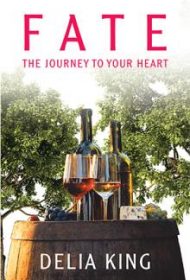 Delia King’s novel, Fate: The Journey to Your Heart, tells the sweeping love story of Laura and Rodrigo, which spans several decades.

This at-times heartbreaking yet tender romance is set in the Philippines and begins in 1962 with the two main characters meeting at a wedding. Rodrigo stands up for Laura, who is being pursued by a high school sweetheart who isn’t very sweet. The two, of course, fall in love, and the novel tells their story, basically from its charming beginning to the sad ending. As King introduces readers to the couple’s love and traces their story through the birth and raising of six children, she delivers two believable, engaging characters

Yet while the characters and plot are well crafted, the story’s delivery can be stilted. The author occasionally mixes up verb tenses within a single paragraph ( “…Laura was to attend her father with his supper, and they would eat together….Sometimes their mother and sister will join in”), and she tells the story so thoroughly that she sometimes divides it by hours (two hours later) and days (three days later). Yet the story can also jump through years in a single bound (ten years later); the plot, for example, jumps from the characters’ engagement to ten years later. Some readers may long to hear about their wedding.

In places, the author also tells instead of shows (“Rodrigo’s family welcomed them humbly. Their feast was generously prepared with their utmost outside their house.” How did they welcome them humbly? What did they actually eat, and how was it prepared so generously?).

Despite these flaws, both Rodrigo and Laura seem like real people, and their love story could even be considered inspirational. The romance is also rather chaste, so Christian and romance readers who prefer this subgenre may appreciate the story.