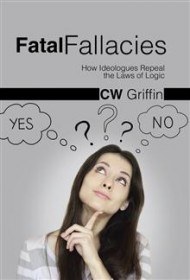 Whether readers appreciate this look at the modern political scene very much depends on their politics: For the most part, C.W. Griffin will delight Democrats and rile Republicans.

The book’s title reflects the nature of the contents: this is a dense, often textbook-like intellectual work demanding considerable effort from the reader. Drawing upon what is clearly a deep knowledge of politics and political ideology, reinforced by a razor-sharp intellect and an impressive and eloquent command of the English language, Griffin sets out to eviscerate right-wing political extremists. Siding with science and logical thought against “logical fallacies” or, as he puts it more bluntly, lies, Griffin examines how propaganda, rhetoric, repetition, euphemisms and other linguistic tricks are used to manipulate public opinion. He does this by analyzing the words of public figures on a wide range of issues, including war (from Vietnam to Iraq), economics, climate change, healthcare, race, taxation and patriotism.

Occasionally, he appears almost impartial, taking shots at extremist views on both sides of the political divide and equally chiding Obama, the ACLU and the Democrats on a number of issues. But mostly Griffin is gunning for those well to the right of center: politicians, policy advisors, pundits, broadcasters (especially with Fox News) and even Supreme Court justices.

Partly as a consequence of such name-calling, Griffin emerges as yet another strident voice in today’s increasingly polarized political debate, albeit more informed than many. The overall impact would have been greater had Griffin steered clear of the mud-slinging and simplified his narrative to be more accessible to general readers.