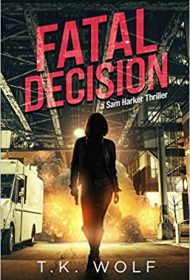 Fatal Decision is the first in  a series of action novels by T.K. Wolf. It features capable female assassin Samantha Harker.

In Harker’s backstory, her parents were killed by a drunk driver who received a slap on the wrist. Filled with rage, Harker rigged the killer’s death in a car accident. Her clever crime was noticed by Delphi, a multinational security firm that runs shadow governments around the world and has tentacles in law enforcement and lawmakers across the U.S. Delphi “recruits” (her other option is to go to prison for the murder) and trains Harker as its top black ops enforcer and assassin. But she goes rogue and begins disrupting Delphi’s missions.

Fatal Decision opens with Harker preparing for a night out. But this is no normal date. The novel’s first sentence sets the agenda: “How do you kill a powerful man?” Harker wonders. A thoroughly-trained killer, she quickly accomplishes her personal mission: to murder one of Delphi’s most lucrative “clients,” a Mexican drug lord.

The plot thickens when Harker falls in love. Delphi finds and captures the couple, and violence ensues. In the remaining story, nonstop action escalates, with mercenaries helping Harker get revenge.

Fans of spy-action thrillers might recognize the bones of this story in old James Bond films or TV shows such as The Man from U.N.C.L.E. The violence of the “John Wicks” film franchise is similar. But the most direct blueprint is the TV series Nikita, which aired from 2010-2013 starring Maggie Q as an orphaned young woman recruited by a multinational organization called Division to do bad things, until Nikita quits and dedicates her life to fighting Division.

While well-worn, the plot is sturdy enough to survive variations in the telling, and Fatal Decision is largely successful. It’s like that roller coaster in the old amusement park, with creaky supports that strain with every ride—yet still offers plenty of thrills.