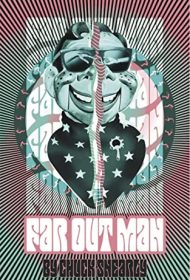 In his popular 1960s’ literature class, Wayne State University professor Jack Crost often quotes passages from books such as One Flew Over the Cuckoo’s Nest and A Confederacy of Dunces. This becomes a problem when a trio of pre-law students he dubs the Wise Guys, taking the course as an easy elective, secretly film him and create a montage that appears as if he’s berating his class and using racial slurs. A line from Dunces makes it seem as if he’s calling his students “mongoloids.”

Not surprisingly, the video goes viral, sparking protests, and Crost is forced to take a year sabbatical as punishment.

Then, during a party thrown for him by fellow faculty, he collapses from an apparent heart attack and is taken to the hospital, where has a near-death experience in which he hears his doctors arguing, floats out of the hospital and sees Howdy Doody on the roof.

As it turns out, Howdy Doody is the name of a new form of methamphetamine that’s found its way into Detroit. As Crost revives and sets out to vindicate himself, he ends up dodging threats against his life.

Far Out Man is an engaging read with well-wrought characters, including Crost’s sidekick Murphy, a former cop and Vietnam vet. Fast-paced dialogue enlivens the tale (although more attribution would have helped clarify who is talking in longer conversations).

Many instances of missing words require correction. And those expecting a book about the ‘60s may feel a bit misled. Although Crost ultimately embraces the decade’s “peace and love” vibe, pop culture references outside of books from his class are mostly in some chapter titles that cite ‘60s songs.

But these are quibbles. The book is well-paced and fun, and will keep readers flipping the pages to its conclusion.