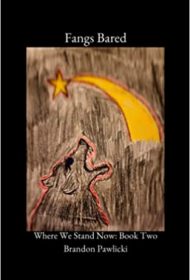 WARNING to those who have not read An End: Where We Stand Now: Book One: This review contains spoilers.

In the first book, Vallerie Sabelle awakens from a coma to find that the military has become a heartless police force called the Bastion; lawless gangs ravage towns; and zombies roam the countryside.

When the Bastion took over, most residents evacuated their homes to look for safety elsewhere. The remaining few set up small subsistence villages, trying to hold out against a multitude of evil forces. Vallerie, her brother Allan and her best friend Trisha set out to find one of these peaceful sanctuaries. Joining them is a starving black dog Vallerie saved from the zombies.

In this installment, readers learn that, sadly, Trisha and then Allan have been killed, leaving Vallerie and the dog she named Bullet to continue the journey. Vallerie soon learns the oath she swore in the first book, “to do no harm,” will be impossible to keep if she wants to save herself and Bullet. Armed with an axe, pistols and long guns, she begins dispatching zombies and Bastion members.

During her travels, she runs across a man named Grahm, leader of the largest commune. She hopes to find safety in his small hamlet, but the Bastion is preying on the villages, taking whatever food, supplies and men they want. These peace-loving citizens need a leader to stand up to this force. Can one woman alone become the juggernaut needed?

As in the first book, Pawlicki keeps the action fast paced and his descriptions vivid and visual. Valerie, who was An End’s best creation, continues to evolve in a believable way, despite her nearly superhuman abilities.

The narrative is undermined, however, by constant errors in verb tenses and the unanswered, overriding question of how and why the world changed. Such issues make it hard for readers to immerse themselves in the novel’s supernatural world. A skilled editor could solve these problems to create a compelling read.