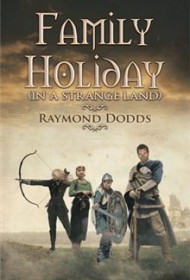 This well-written and richly descriptive adventure is a portal fantasy about an American family vacationing in England that gets transported into a magic-filled realm inhabited by dwarves, goblins, and other supernatural creatures. The main plot thread revolves around a looming war between the forces of good and evil.

Ed and Liz Deeks (an engineer and doctor, respectively) and their two teenage children Kate and Jay have temporarily left the comfort of their home in Seattle to spend a vacation touring the historic sites of England. But when Ed drives off of a remote back road while battling fog thick as “pea soup” and gets the car stuck in a ditch, the holiday takes a fantastical turn as the family finds itself in the realm of Angron. A preindustrial world where humans rely on horses for transportation, blacksmithing, farming, etc., the Deeks quickly realize the fantastical nature of Angron when they meet and befriend dwarves who help them after a gang of goblins accost them. Soon entangled in a burgeoning conflict that involves a goblin plot to conquer and enslave the inhabitants of Angron, the four Americans—with no other options—decide to join the fight.

This is an engaging story that has but one major flaw: The fantasy realm into which the Deeks family is transported is conspicuously uninspired and conventional—essentially the same Tolkienesque setting that has appeared in countless fantasy novels. Clichéd fantasy backdrop notwithstanding, however, Dodds excels at character development and utilizing the disparate cultural differences between the Deeks and the Angronites to create a subtly humorous undertone. For example, at one point, Ed is thought to be a knight because his Seattle Seahawks sweatshirt resembles the herald of the king (a silver eagle on a sea of blue).

Admittedly, this story is not exactly original. But this first volume of a projected quartet of novels is immersive and entertaining. Fantasy fans will find it a highly readable offering.