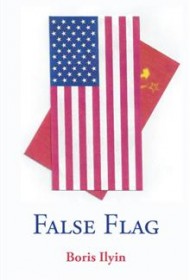 The 96-year-old author of this competent spy thriller has seen his share of dark alleys and international intrigue. Boris Ilyin’s back-cover bio teases that he spent the years 1950-1969 “participating” in the Cold War. The fact that the hero of his fictional tale is an idealistic CIA agent named Ben Ingram (same initials as the author) says a lot more.

Set in Paris in the 1970s, False Flag pits young Ingram, a fervent anti-Communist, against a wily KGB adversary called Andrei Chernov, who (like the author) was raised in San Francisco by Russian emigre parents. Steeped in Soviet doctrine but intimate with American ways, Andrei poses in France as a cowboyish “industrial management” expert named Jim Stevens. Inevitably, “Stevens” and Ingram (posing as an abstract-impressionist painter) wind up wooing the same beautiful foreign correspondent, whose mildly leftish views on Vietnam and the Red Menace Ilyin clearly disdains.

The real prize here is the future of a Third World nation called Sigirim, an African “domino” in what Ilyin paints—at great length—as the battle between Good and Evil. Not for him LeCarre’s grubby Cold War ambiguities, nor James Bond’s glamour: Ben is a stern U.S. patriot who cringes when the reporter points out that “deceit perpetuates deceit” between East and West; his efforts to foil Andrei’s plans for a Red coup in Sigirin suggest a holy quest.

Ilyin can clearly turn a phrase. “The sky was already lightening; ultramarine washing down to a yellow-pink at the horizon,” he writes of the Paris dawn. But his plot action could use an accelerant, his ruminations on Life and Art some ruthless cutting. Still, this is a substantive and exciting Cold War melodrama written with obvious personal authority. Good moviemakers could refashion it into pure thrill, decorated with moral complexity.