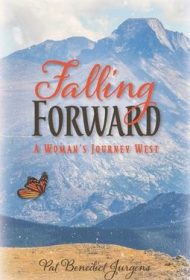 Falling Forward is much more than a tale of a westward journey. At its heart is a story of how its female protagonist navigates a patriarchal society on the cusp of women’s suffrage during the turn of the 20th century.

Louisa Steinbacher is born into a strict Mennonite family on a farm in Ohio. But within her burns the craving to move beyond the prescribed female roles of mother and homemaker, roles she finds crushing. In search of her true self, she flees those rigid religious and societal straightjackets and heads West, where she must deal with the painful challenges of being swept up in two movements: westward expansion and the fight for women’s empowerment.

Along the way, she is married, widowed and courted again. She is oppressed and abused, but recovers, stronger than before. All the while, she wavers between the need for security that the traditional roles offer and the self-sufficiency society frowns upon. The tension between the two compulsions keeps the story moving quickly in unexpected directions until its resolution.

Jurgens skillfully integrates into this intensely personal struggle a realistic and colorful narrative of a West that is in transition from the wild and woolly to a modernizing and urbanizing world on the threshold of automobiles and airplanes. Before arriving there, readers are stylishly immersed in the hardscrabble farm life of “springhouses,” “haymows” and “singletrees” and a land where “Tall grasses leaned and swayed, crossing their stems like young girls dancing in gay abandon.”

This story provides a measure of how far we have come from a time when women were denied the franchise and fundamental rights now available. It is an engaging slice of history that reminds readers of the personal costs that civil rights pioneers paid to realize those blessings.