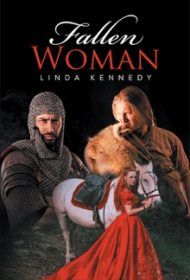 Fallen Woman is a romance novel about a fictional 17th century noblewoman.

As the story begins, Lady Catherine is preparing to leave her family home. Her lands have been given to an English soldier, Giles, who the King and Queen hoped would marry her, but he has refused her because she has an illegitimate child. Things change when Catherine and Giles actually meet, but even as they build a life together, Catherine’s past—being kidnapped by Vikings but then falling in love with one of her abductors and having his daughter—will be an important part of her future.

This is a fast-paced historical romance, packed with incident. Linda Kennedy’s characters are warm and likable. Cat is a strong-willed and attractive heroine with a love of children and horses. Her interactions with the two love interests in her life are well described with lively dialogue and humor.

As a work of historical fiction, however, the novel suffers from a lack of basic research. Viking raids on England ended more than four centuries before the time that Fallen Woman is set. The King Charles I and Henrietta Maria portrayed in the novel bear no resemblance to their real historical counterparts in their actions, or even in the names of their children.

Frequent changes of point of view are exceedingly confusing as Kennedy jumps in and out of different characters’ thoughts, often within the same paragraph. Additionally, the language used is sometimes jarringly modern, (for example, “Somehow, Marie would probably have liked that; it would have pissed Charles off even more”), and several scenes lack coherence because of the rushed pace of events and changes of point of view.

Such issues can make reading difficult in places. That said, those who can set aside these concerns will find a largely appealing plot with likeable characters.