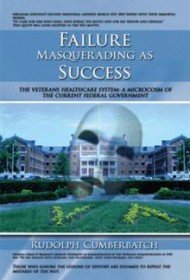 When Barbados-born, Harvard-educated surgeon Rudolph Cumberbatch joined the Veteran Affairs as chief of surgery in 1985 after years of private practice, he fully expected to do all he could to honor his veteran patients and protect them from harm. At the VA hospital in Cheyenne, Wyoming, he received high praise for the staff’s professionalism and competence. But when he headed east to Tennessee to become chief of medicine at the Murfreesboro VA Hospital in 1992, he found “a toxic, dysfunctional environment” rife with “corruption, incompetence, and racial intolerance,” as well as “gross mismanagement, and devious and vindictive behavior.” He witnessed deteriorating medical care for veterans that, he reports, led to preventable errors, mistakes, and even unnecessary deaths.

Cumberbatch’s book is a highly detailed, vitriolic condemnation of the poor clinical care rampant at some of the government’s VA hospitals. The author carefully details the many issues of incompetence he encountered, naming names when possible and, when he can’t, using harsh pseudonyms (Dr. Slick Wilbert, Dr. Nasty, and Dr, King Crab, the latter whom he calls “an equal opportunity dispenser of rudeness and belligerence”). The author supports his numerous accusations and battles among various VA officials and staff with details from memos, correspondence and other interoffice communication, as well as newspaper articles.

While this appears to be a cathartic book, the author’s caustic approach could be off-putting for the average reader, distracting from Cumberbatch’s main message, which is aimed at the need for real change to the system to benefit veterans and their families. He concludes by suggesting ways the health care system should be altered, such as by putting critical care in the hands of clinical experts rather than bureaucrats with little knowledge of medicine.

The author makes clear that some VA hospitals are doing a harmful disservice to the veterans they should honor. His generally well-written book will appeal to those with the desire and means to improve the health-care system for the veterans.