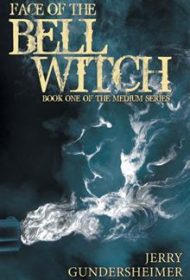 Although categorized as occult fiction, Jerry Gundersheimer’s debut novel—about a Clarksville, Tennessee man who can communicate with the dead—is more fittingly described as a fusion of paranormal thriller, mystery, and police procedural.

Comparable to Dean Koontz’s Odd Thomas series, this novel—the first of Gundersheimer’s Medium saga—begins with an undeniably strong hook. The author immerses readers in two seemingly disparate storylines: the first follows medium Brody Whitaker as he and his 10-year old daughter struggle to come to grips with her burgeoning gift to converse with those who have passed over; the second chronicles a sadistic career criminal, Teddy Trent, who manipulates his younger brother Lyle to participate in a brazen bank robbery with him. Both storylines are powered by deeply developed and authentic characterization as well as an action-packed, relentlessly paced plot.

The dichotomy between narrative threads is evident. Whitaker casts a benevolent light, acting as a loving and supportive father as well as a caring friend and potential lover to a beautiful producer who wants him to film segments as the “Clarksville Medium” for a local television station. Trent, on the other hand, is pure malevolence, negatively impacting everyone around him. When his brother gets shot during the robbery, Trent drives him to a remote location and dumps the body by the side of a river. In the few moments that the brothers were split up just after the robbery, however, Lyle managed to hide the money somewhere—and doesn’t tell Trent the information before passing. The two storylines eventually collide, and chaos ensues.

The novel’s ending isn’t as much a conclusion as a respite until the next novel. The cliffhanger, although tantalizing, may leave readers unsatisfied. Nonetheless, there is much to like about Face of the Bell Witch: endearing protagonists, an impressively intricate storyline, a page-turning pace and more. Conclusion notwithstanding, this is a strong start to what could be an extraordinarily entertaining series.