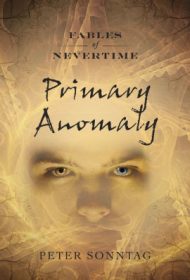 Set in the near-future (2180) on a post-apocalyptic Earth, Peter Sonntag’s first installment of his Fables of Nevertime saga is an action-packed science fiction thriller.

A terrorist attack on an all-powerful multinational corporation specializing in human bioengineering sparked a nuclear chain reaction leading to the cataclysm known as the Downfall. The world is now a vast radioactive wasteland. Some semblance of humankind’s advanced technology has been saved in fortresses known as Habitats, while the rest of the world’s population live in largely lawless towns inhabited by mutants.

The Habitats are not utopias, but glorified slave camps ruled by a tyrannical government that considers its residents “drones.” Shortly after a group of drones is violently consigned to become human lab rats for a project to create genetically enhanced soldiers, the Habitat is attacked by mutant rebels. In the chaos, one drone involved in the experiments escapes and is eventually caught by a scavenger who attempts to sell him in a nearby town as a slave.

The drone—called Three because of the numbers tattooed on his wrist—is ultimately saved by the mutant nation’s queen. But the Habitat’s brain trust wants Three (and his potentially world-changing secrets) back. When war breaks out, the drone is at the center of a conflict that could once again destroy the world.

The main characters are impressively well developed. For example, the leader of the military force tasked with finding Three is ruthless and cold-hearted but also a loving father and husband whose morally repugnant actions are driven by sympathetic reasons. The pacing is outstanding, the story is filled with effective action, and the author’s description and world-building is commendable.

On the down side, an unnecessarily graphic sex scene proves jarring and distracting. And a less-than-satisfying conclusion seems more like a respite before the next series’ installment. These are minor issues.

Overall, post-apocalyptic fiction fans will find this an intriguing start to what could be an excellent series.