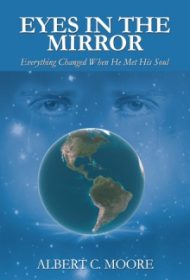 In this novel based on events in the author’s life, 39-year-old Zach Morgan’s life flashes before his eyes under the stress of having to make an unexpected life-or-death decision. On this trip into his past, he’s accompanied by his soul, an apparition named Domini.

As the book begins, Zach and his wife are shocked to receive the results of her amniocentesis: Their unborn daughter has a severe genetic disorder. Drained after hours of tearful discussion, Zach slips, falls, and hits his head. He then finds himself floating above his body and hears a voice telling him, “Be not afraid, Zach… I AM Domini! I AM your Soul!” A human figure appears, and they fly to “The Swing Between Worlds.”

There, Domini leads Zach through Twelve Chambers in which Zach relives his strained relationship with his father, the difficulties he faced because his own hands are deformed, his struggle to study and work as an architect and urban planner, and more. As these experiences are replayed, Domini teaches Zach key New Age concepts familiar to anyone who’s read the work of Marianne Williamson, Gary Zukav, and Eckhart Tolle.

In the last Chamber, Domini graces Zach with a vision of a New Earth where the self is mastered and humans live in blissful unity. Ultimately, these revelations help Zach and his wife decide what to do about their unborn baby.

Zach’s memories are well-told and moving, and The Swing Between Worlds is a believable setting for Domini’s lessons in the Soul’s struggle to achieve unity, balance, and harmony, thanks to the author’s talent for bringing classic architectural forms such as grand staircases, golden domes, and gilded doors to vibrant life. Unfortunately, the dialogue is stilted, impeding reader engagement and narrative flow.

As a result, the story doesn’t quite succeed as a novel of spiritual quest, such as Siddartha or The Alchemist. Nonetheless, Eyes in the Mirror is a solid introduction to New Age philosophy that readers may appreciate.