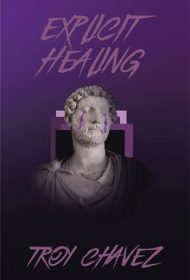 Troy Chavez’s Explicit Healing is a collection of dense prose poems that, near the fulcrum of the book, gives way to a highly compressed, six-act screenplay called The Kings [sic] Court.

Chavez’s poetry is generally energetic and rhythmical, perhaps intended to be performed as spoken-word, almost like hip-hop, as in “The Rambling Lover: “Spread to the couch, playing games like a mouse. Touching lips on heavens peak. Chased down the street, seem to be on a streak…” Creative wordplay abounds, and readers will find memorable lines, such as: “Take a rich stance and become a Reagan,” “Do me right with a dash of danger,” and “Crying, why? The trees sing to the birds and the birds sing to us.”

However, the subjects Chavez addresses are overwhelming in scope and erratic in tone. Subject-wise, they span personal philosophy, religion, fantasy, romance, desire, and social critique. Tonally, they ping-pong from amorous seductions like “Sex Me with a Touch of Love” to social/political rants like “Stepping into the Cesspool.” The five chapters into which these poems are arranged—“In the Land of Mania,” “Prophecies in the Blind,” “Roses and Thorns,” “Dazed and Misconstrued,” and “Capitol Suffering”—provide little context to clarify who the speaker is (or if there are multiple speakers) and what the title “explicit healing” refers to, leaving readers confused and adrift.

Chavez’s screenplay is a non-sequitur from the poetry preceding it. It explores themes of power and retribution against the backdrops of a castle, knight’s estate, English village, and later the city of London. The central characters include a royal family, knights, and a jester. A Narrator dominates, offering an intrusive level of backstory and commentary rather than allowing the plot to develop through the characters.

While some readers might enjoy the wealth of wordplay in these poems’, the collection would be more effective if the poetry and screenplay were presented in separate volumes, each revised with the above commentary in mind.