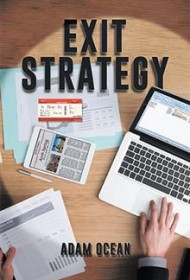 Othman Lyouni is a Londoner who runs HSC, a company that provides services for Libya’s oil industry. HSC has been successful, but Othman learns that Qaddafi’s regime is planning to bankrupt the company. Soon, a stranger named Nasser contacts Othman, promising him a way out with a scheme involving money laundering and other illegal activities. When Othman’s legitimate efforts to save his business fail, he agrees to enter Nasser’s corrupt, decadent world.

Othman tries, with varying degrees of success, to maintain his integrity. He establishes a legitimate business within Nasser’s criminal empire, and helps his employees in Libya escape the turmoil of the Arab Spring. Throughout this struggle, Othman engages in an on-again, off-again relationship with his assistant, Dylana (sometimes spelled “Dylane”), who disappears, reappears and acts alternately warm and distant.

Ocean offers an interesting and unvarnished, though not unsympathetic, view of his protagonist.  Othman’s business dealings and sexual exploits are simply what he does to survive, or to get through the day.

Exit Strategy, however, is not without flaws. Ocean writes in frequently non-idiomatic English. Sometimes, this leads to an engaging turn of phrase (“Othman had become the skin of a hollow fruit”), but more often it feels stilted, even confusing (“I’ve been offered the job I was looking for meanwhile. . . . The edition in New York is what I’ve always dreamt of doing”).  Additionally, the relationship between Othman and Dylana feels inorganic, which lends many false notes to the novel. Othman’s dealings with his colleagues, his estranged wife, even his gold-digging girlfriend seem more authentic.

Despite its flaws, Exit Strategy may appeal to some persevering readers looking for something a bit different, especially given the view it offers of international business dealings. But with heavy editing, it could have much broader appeal.