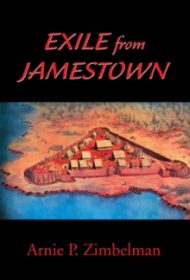 Exile from Jamestown by Arnie P. Zimbelman is an historical novel about the arrival in 1607 Virginia of a band of Englishmen hoping to find gold and riches in the New World.

Geoffry Payne is a 24-year-old stonemason who yearns for more adventure than is available in the town of Salisbury, England. He joins an expedition to the New World and on the journey befriends a sailor, Billy Bascomb. As the colonists work to build a settlement in Jamestown, Geoffry and Billy find favor with Captain John Smith, but Smith’s protection doesn’t last forever and a range of dangers—hostile natives, enemies within the colonists, disease and malnutrition—increasingly threaten their safety.

The story is based on interesting and little known historical facts. The details of the expedition across the Atlantic are accurate, and several real historical characters are introduced. Captain John Smith, for example, is an intriguing man and his story, including his strict running of the colony and an encounter with Pocahontas, matches the historical record. Other incidents of interest include a period of starvation that culminated in acts of cannibalism and Geoffry’s meeting with the little-known Lumbee tribe.

Unfortunately, extensive use of dialect in the dialogue makes the text challenging to read at points. Billy Bascomb’s speech is reminiscent of Victorian chimney sweep slang and inconsistent with the early 17th century setting. Italics are heavily used (in addition to some bolding and underlining) to indicate emphasis and emotion, rather than the author allowing the characters’ words and actions to speak for themselves. Billy and Geoffry are likable but simple characters who remain detached from the chaos and threats that surround them, cheerfully living in their own house and showing little genuine emotion even when events involve them directly.

Overall, this is a potentially interesting story. However, weak dialogue and insufficient character development will likely limit its appeal.