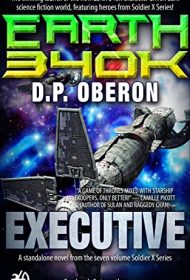 Australian writer D.P. Oberon’s Executive—the first in a series of standalone novels set in his Earth 340K —is page-turning science fiction. Powered by character-driven storylines and visionary world-building, the tone and style of this novel is comparable to Ben Bova’s iconic Grand Tour sequence.

Set in a future where the planet is terminally polluted and the rich live in what are essentially floating cities, the story revolves around Saradi Anantadevi-Alfsson, the Chief Strategy Officer of a firm contracted to build the world’s first “seed-ship,” a spaceship that will ferry colonists to habitable planets in the universe and ultimately save humankind from extinction. Saradi is a mother, wife, and raging alcoholic whose life is spiraling out of control. The pressure associated with getting Rebirth built in time is overwhelming—and when she learns that her beloved brother, a soldier in the Austra-Asian Empire Defense Force, is missing in action, she is pushed further to a breaking point.

As her relationship with her husband and daughter deteriorates, she makes some highly immoral (and felonious) business decisions and eventually gets caught. But instead of being incarcerated, she’s offered an option: join the military and get the opportunity to not only save the world but rescue her brother as well.

An appealing blend of conventional and military science fiction, this is a very readable novel but not without its faults. In particular, the middle section, where Saradi enters the AAEDEF and goes through extensive training, is predictable and a bit boring. But there’s much to like here: The character development is excellent; the portrayal of future Earth is meticulously described and realistic; the storyline is impressively complex, and the conclusion is both shocking and satisfying. Additionally, it’s obvious the author spent time going over even the smallest detail  (the subtle homage to Jordan’s The Eye of the World, for example), lending a highly polished feel to the story.