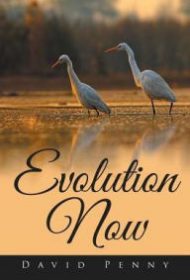 Evolution Now, by David Penny, is primarily a discourse on the history of the theory of evolution. However, the lack of a clearly stated thesis, poor structure, and numerous digressions make it difficult to categorize.

Penny spends the first two chapters exploring early (17th century through 19th century) beliefs about the creation and evolution of plants, animals, and humans, and the next three primarily examining why Darwin’s theory was revolutionary, the history of genetics, and of human evolution.

Chapter 6 digresses to a discussion of mass extinctions, focusing on the disappearance of dinosaurs. Penny then discusses, in Chapter 7, eukaryotes (nucleated cells) and akaryotes (non-nucleated cells) and concludes with “What We Don’t (Yet) Know about Evolution,” a series of topics he’d like the future to reveal more about.

For the most part, the text seems to have been transcribed verbatim from classroom lectures Penny might have given, with little editing. As such, it often meanders. For example, one paragraph starts with the idea that “We will first examine the relatively recent loss of the megafauna over the last 50,000 years…” It goes on to discuss Ice Ages, the importance of climate change, the idea that we can’t blame early humans for any extinctions due to their beliefs, and finally that “we really don’t know about early human ‘beliefs’, [sic] particularly those from 10,000-50,000 years ago” (contradicting the previous statement). While each idea is loosely linked to the paragraph thesis, readers will struggle to find a through-line.

In addition to the rambling text, the intended audience is unclear. The at-times humorous tone and asides (“Okay, we now realize that ‘extinction is forever’…”) seem meant for lay readers but are at odds with sections on RNA, DNA, protein structure, and so on, that are dense with vocabulary requiring some subject knowledge. While there is a bibliography, there’s no index or glossary.