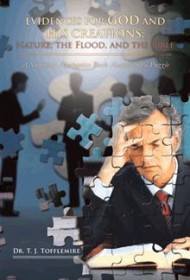 Dr. T. J. Tofflemire’s Evidences for God and His Creations is a survey of apologetics that propounds numerous philosophical and practical defenses for the Christian faith. Exploring such topics as truth, logic, biblical worldviews, miracles, the tensions between faith and science and the existential idea of absurdity, the author attempts to distill centuries of thinking into short explanations. As he writes, “At times a sentence or two in this book will be described by 10-50 pages in another author’s detailed book.”

This attempt at succinctness is praiseworthy, and, in general, Tofflemire helps to cut through the overgrowth that is constantly impeding one’s understanding of Christianity. Yet, this approach turns out to be a double-edged sword, at least for general readers.

Tofflemire is knowledgeable about his subject, and his writing is mostly straightforward. But in his dash to simplify matters, he sometimes moves too fast. For example, at the very beginning of the book, he writes: “Reason is a friend and not an enemy to faith [sic] states Kreeft… ” Who’s Kreeft? Some readers may know that it is philosopher and theologian Peter Kreeft, but others may not.

Moreover, Tofflemire’s thoughts have a tendency run into each other. On pages 3-4, his explanation of “inductive” and “deductive” logic involves so many ideas from different writers and moves so quickly that it causes some mental overload. The author’s rapid-fire delivery of information has its limits and creates a blurring effect. Another example can be found in pages 83-122, which focus on the science of creation. While these passages contain some the author’s most interesting material, they can be dense and hard to understand because of the influx of ideas.

Tofflemire covers a lot of ground in this ambitious book. But he needs to slow down a bit, properly introduce his material and transition from thought to thought in order for readers to get the most out of what he has to offer.