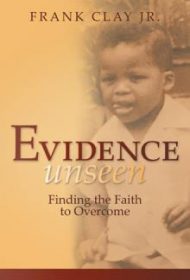 In his memoir, Frank Clay Jr. shares his life story, along the way presenting life lessons for young people.

Born in Philadelphia in 1955, Clay had a sometimes-difficult childhood. His father drank to excess, his mother taught the kids to shoplift. Gangs, bullies, rats, and foul-tempered cats were part of his life. But so were relatives and others who kept him on the straight and narrow. A grandfather taught him to play checkers. His grandmothers showered him with love. He joined the Cub Scouts and Philadelphia Boys Choir and attended Bible classes.

When Clay got out of school, he joined the Army, rising to the rank of captain. After leaving the military, he earned an MBA and entered corporate America. There, as an African American, he faced more challenges. But, he writes, his perseverance and faith helped him succeed, and he had a distinguished career in sales and the insurance industry and as a speaker, executive coach and entrepreneur.

Clay is a solid writer whose military mindset is obvious: He’s precise, logical and intelligent. The book’s first half flows nicely. But the second half, where he delves into the workings of one particular company, ClayGroup, becomes bogged down with jargon and details about dealing with the government, slowing the pace.

In addition, he frequently blames business setbacks or personnel missteps on others. For example, on a business trip to Guinea, he’s accused of bribery and brought before a tribunal; he blames this on an unnamed government official “who had his own agenda.” Another time, he bypasses the chain of command and works on setting up a lucrative deal; he’s baffled when relegated to running a copying machine three days later.

Despite such lapses in self-awareness, Clay has accomplished his stated goal of showing his grandchildren how success can be achieved through faith, commitment, confidence and good work. It’s never easy, he writes, but “I am evidence that it can be done.”