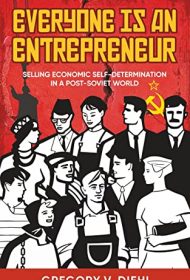 Educator and personal development mentor Gregory V. Diehl, author of three other nonfiction books, including The Heroic and Exceptional Minority and Travel as Transformation, delivers an earnest paean to the superiority of capitalism through the lens of his years living in a Kalavan village in the Gegharkunik province of formerly communist Armenia.

Diehl moved to Armenia for early retirement and is now observing how the country, where he has ancestral roots, has adjusted to “the freedoms and responsibilities that come with economic self-determination.” The greatest challenge his new countrymen face, he says, is a lack of entrepreneurship— which he calls “a revolutionary way of seeing the world” —either in mindset or in practice. His fervor for self-direction sometimes tips into the grandiose, as he writes: “to cease being an entrepreneur would be to give up entirely on the idea of a principled approach to life” and “It is impossible to consciously live without doing this [acting entrepreneurially].”

Diehl follows with lessons in basic economics—supply and demand, scarcity, marketing—illustrated with occasional stories of his neighbors. His loathing of communism comes through strongly, and he too often errs on the side of casting himself as the wiser and superior character in this village, bringing the good news of capitalism to the innocent populace.

The framing of the book (and its subtitle) implies a lively fish-out-of-water story as Diehl attempts to preach his capitalist gospel to his new neighbors, but those stories are merely short punctuation between long treatises on the ethical and practical necessity of entrepreneurship. Thus, Diehl misses the opportunity to tell an interesting story, choosing instead to deliver largely generic lectures on basic economics and to condescendingly cast himself as smarter than everyone in the village.

Ultimately, too much treatise and too little anecdotal narrative make this a hard match for most likely readers.