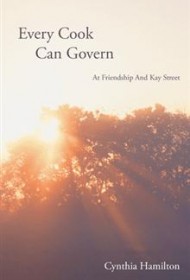 The title of Every Cook Can Govern comes from an essay by social activist C.L.R. James, a man Hamilton worked for between undergraduate and graduate school. The author, an educator and community activist herself, writes that the book is “part autobiography, part tribute [to her mother], part polemics.”

The author details her background and journey through the academic world (she graduated from Stanford and taught at several universities across the country, retiring from the University of Rhode Island, where she was chair of African and African American studies). When Hamilton became incapacitated by MS, her mother, at age 80, moved in to take care of her house. Subsequently, her mother — 96 at the time of the writing of the book — developed dementia, and their roles were reversed.

As for Hamilton’s advocacy, she champions community on both an urban level and a smaller scale, such as the community in her home on Kay Street where a variety of caretakers have helped her and her mother.

Unfortunately, all three areas of discussion get only a cursory presentation. The book has fewer than 70 pages, and much of the material that is presented is offered more than once.

In addition, Hamilton’s writing can be confusing. She often changes tenses between past and present, for example, when relating an event. (“Mom was amazing. She did everything. . . . She will even be my driver.”) And her narrative disregards details such as names and dates, leaving readers with questions.

While Hamilton clearly has led a life worthy of reflection and has much to convey, the overall result of this effort is a less-than-compelling read for general audiences.