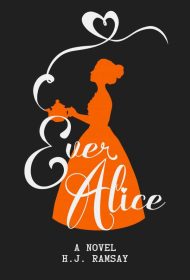 With whimsy and humor, H.J. Ramsay drops Alice—and readers—back down the rabbit hole to Wonderland for a new adventure in Ever Alice, an imaginative narrative continuing the adventures of Lewis Carroll’s young protagonist and the fantastically strange world she discovered.

Ever Alice opens with Alice struggling in the world above ground. Her family believes her to be mad, and her parents are bouncing their child from doctor to doctor in hopes of finding a cure for the baffling ailment that has her talking about fantastical creatures as though they are real.

Rescuing Alice from a most terrifying treatment, Ralph—the White Rabbit—appears to whisk the young girl back to Wonderland. But Ralph’s motivation is not to save the day. He and his cohorts, the Aboveground Organization, are recruiting Alice to assassinate the Queen of Hearts.

Ramsay’s tale is steeped with mystery and suspense as well as playfulness and fantasy. Her use of fanciful language—such as describing the Queen sending a decree with: “She called for a carrier pigeon, who sent them along via snail”—gives the story a light-heartedness. The plentitude of absurdity keeps with Carroll’s original tales.

The exceptions to this are the similes. Instead of being nonsensical and funny, they are often awkward, leaving readers scratching their heads, instead of tickling their funny bones. For example, at one point, the author writes that “Rosamund sank into the gowns like a cat in a bird’s nest.” (Cats may pounce on a bird’s nest or sniff it, but they don’t luxuriate in a bird’s nest. Thus, the comparison doesn’t work.)

Despite the inelegant similes, Ever Alice is a fun romp through Wonderland, complete with appearances from Carroll favorites, such as the Cheshire Cat and the Hatter, as well as Ramsay originals, including Mary Ann and Mary Lou, the daughters of Tweedledee and Tweedledum. In all, this is a rabbit hole well worth tumbling into.