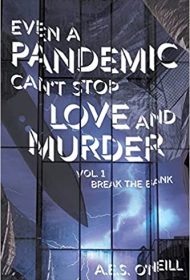 A.E.S O’Neill’s novel is a romantic thriller that takes place over seven days in a near-future New Jersey weakened by repeated COVID pandemics.

Alby is working a construction job in Iraq. Increasingly, he spends time outside the Green Zone with a Muslim family, developing relationships with co-worker Ahmed and his sister Aliyah. When the family is murdered by American Marines looking to frame them for industrial sabotage, Alby is whisked into witness-protection by corporate handlers seeking to put a positive spin on events.

On returning to the U.S., Alby develops rules to stay safe. He works low-key jobs with his nephew and as a subcontractor hiring workers for undesirable positions. For one job, Alby hires a trio of lower-tier criminal opportunists to strip asbestos out of a bank. They subsequently steal a signed, blank check from an unlocked safe, without knowing the mob runs the bank.

On discovering the check has been stolen, The Owners hire a hitman to retrieve it. With terrorists and a hitman hunting him, Alby finds himself flaunting his own rules when he meets dance-instructor Ginger and is swept into a whirlwind courtship that further complicates his knotty existence.

O’Neill’s novel is an intriguing crime story packed with shady characters, double-dealing and violence. It’s also a romantic drama about a man struggling to adjust to civilian life, PTSD and the possibility of true love.

While these conflicting narrative strands seem incompatible, O’Neill confidently weaves them into a complementary whole. Alby and Ginger’s romance is brimming with witty dialogue, comedic interludes and conflict. As readers worry about their wellbeing, the dramatic tension becomes impactful.

Alby is a believable, psychologically troubled hero, struggling to adjust to the “small life” prescribed to him. And Ginger provides the perfect antidote to Alby’s moodiness. A decent gallery of supporting characters help round out the narrative.

However, Alby and Ginger are the novel’s driving force, and thankfully for thriller fans, they are well worth spending time with.