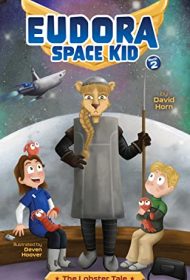 In David Horn’s second chapter book in the Eudora Space Kid series, a precocious third-grader who lives in outer space plots to save the ship’s lobsters from being eaten.

Living on a massive spaceship provides ample opportunities for Eudora to pull pranks using her advanced technological skills—activities that often land her in the brig. She routinely persuades her best friend Arnold to help, although he’s more comfortable toeing the line.

One day Eudora, with Arnold in tow, finds a room of computers and discreetly makes “a few adjustments” to one. Afterward, the two scamper to watch a routine battle-training exercise performed by the ship’s crew. But after the captain shouts “red alert!” a song about wiggling “your booty” booms over the PA—while Eudora laughs on the sidelines.

Later, Eudora learns that the lobsters in the marine biology lab—whom she loves and has even named—are slated to be served at a buffet. She convinces Arnold to help her save them. Funny scenes follow when they run into Arnold’s father as they hide dripping bags of lobsters behind their backs. The ending brings a clever surprise when the Qlaxons, their biggest enemy, threaten to destroy their ship, and the lobsters and booty song come into play.

There’s one minor misstep: Eudora’s father, head marine biologist who also enjoys the lobsters, emphatically tells the chef the lobsters are off-limits, but he inexplicably changes his mind. Some explanation for this reversal would be helpful.

No matter: Horn delivers a skillfully plotted and delightfully imaginative story. Eudora makes a splendid protagonist: She’s curious, empathetic, smart, and spirited. She also makes funny observations: “Grown-ups like nodding. They think you agree with everything they say.” Additionally, the book is stuffed with wacky, age-appropriate humor that young readers will gobble up. Deven Hoover’s comedic black-and-white illustrations add to the fun.

Horn’s book is sure to leave its young readers tickled pink and eager for another sequel.