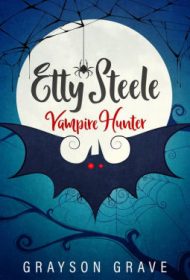 Etty Steele, the scrappy 10-year-old budding vampire hunter and protagonist of this wittingly engaging novel, is a welcome addition to the bloodthirsty literary fantasy world.

Etty and her best friend (given the unfortunate name of April Showers) each are coming into their own alter-ego powers. Etty is a vampire hunter and the youngest in a matrilineal succession, while April is just discovering her own heritage as a witch. But because their families strive to blend into their non-fantastical suburban neighborhood and because they are at that painful stage of adolescence, they go to great lengths to disguise their singular talents.

Then they meet Vladimir Nox, a new addition to their Form Six primary school class. Vladimir! If the name alone doesn’t signal a warning, Etty’s vampire hunter senses are tingling nonetheless. She is pretty sure Dimi—the new kid’s preferred nickname—is a member of the species she’s been taught to hate, fear and trap for imprisonment in a remote Scottish island. Meanwhile, April is just as certain the newcomer is a good guy. (Would a self-respecting bloodsucker be caught, um, undead with the purple glitter lunch box Dimi carries?)

Etty remains skeptical, especially after her mother, a merciless vampire hunter who puts Etty through stringent drills, abruptly disappears along with another Form Six student, following rumors of a newly arrived vampire coven. Will Etty’s ethical sense of duty—she refuses to kill without proof of evil intent—overwhelm years of training to exterminate vampires?

British author Grayson Grave, a former primary school teacher, clearly knows his middle-reader audience and its challenges. There’s a class bully, a stern but compassionate teacher and the perpetual inconvenience of homework. He embues his characters with relatable strengths and foibles, and Etty is a particularly dynamic, engaging protagonist. The story is a lively combination of action, brisk dialogue and page-turning cliffhangers. A penultimate scene sets the stage for a sequel.