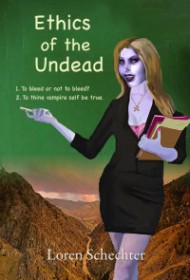 The various iterations of teen vampires in fiction have taken so many forms that a website recently spoofed the genre by writing about vampires who were actually Yorkshire terriers. What’s even weirder than that? How about a charter school for Libertarian vampires? Ethics of the Undead fills that void splendidly, and does so with equal parts gore and humor.

When four teens receive scholarships to a wilderness school in rural Idaho, they have no idea it’s a scheme to fulfill a diversity requirement of the school—and then possibly provide a snack for either students or faculty. Once a counselor accidentally spills the beans, the teens team up to try and escape. Meanwhile, there’s an obligatory doomed romance, a trial whose jury is comprised of a busload of kidnapped gymnasts, and several digressions into the ethics of which humans, and how many, are okay to eat at a given time (the discussion is part of the curriculum!). It’s a wild ride, and the plot twists alternate with big laughs.

Author Loren Schechter writes with snap and intelligence. A subplot involving a group of Satanists who throw off the balance of power at the school is effective, and the pains the staff takes to survive the diversity inspection needed to continue its funding are a riot.

Teen vampires are a popular trope precisely because they raise so many ethical issues and ratchet up the stakes on the usual teen angst: for example, when vampire Conrad confesses his feelings for Kathy, she’s tempted to let him “turn” her, but isn’t ready to commit to one person for a full semester, much less all eternity. While a regular teen occasionally cheats death, these teens have beaten it entirely, and are suffering from both anemia and ennui as a result.

Ethics of the Undead will appeal to fans of horror laced with humor and give vampire lovers something new to sink their teeth into. This novel is a page-turner and a pleasure.