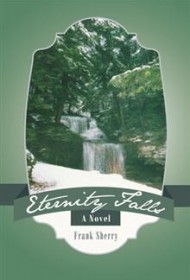 Eternity Falls is a strange and haunting story that looks at mortality through a spiritual and supernatural lens.

At 54 years old, Gabriel Fallon has a loving wife and family, but feels like a failure as a writer. When he learns that his estranged brother is dying, he’s forced to look back at their difficult upbringing and try to reconcile the past and present.

His musings lead him to a waterfall near his home, which seems to hold the key to Gabriel’s unrest, if only he could decipher what it’s trying to tell him. This obsession is one more thing that keeps him disconnected from his extended family; as they come together in grief, he begins to realize that isolating himself for protection has only made the ghosts of his past stronger.

Author Frank Sherry has taken an ambitious chance with this novel, and it pays off. The issues of faith that come up within Gabriel’s extended family and the history he has tried to run from are both revealed artfully, and the book’s ending is a complete surprise. Sherry introduces a large cast in a fairly short novel, and keeps all the characters distinct and recognizable. He captures some hard truths about how families fall apart and the bonds that can (and can’t) be mended after a long separation.

Eternity Falls was an iUniverse “Editor’s Choice” pick. The accolade is deserved; it’s a gripping novel. Book clubs would be wise to consider it, as it falls somewhere between literary and popular fiction, and there’s much here to discuss.