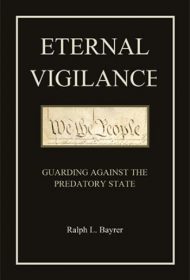 The left-right polarity in U.S. politics revolves around two views of government. Does government intervention in the economy, e.g. through social programs, help or hinder? For Ralph Bayrer, it’s clearly the latter. Bayrer’s book is a sustained argument in favor of small government, free market conservatism.

Bayrer begins by making a case for what he terms the “Free Extended Order” (FEO) in which government’s role is chiefly to protect private property and remove impediments to the free market. He discusses the temptation of governments to overstep these bounds and how the U.S. Constitution checked this tendency. For Bayrer, this system of checks and balances, and with it his FEO, was undermined by activist governments beginning with early 20th century progressives, spawning, he posits, negative results.

The author discusses examples of countries that moved toward activist government resulting in financial crises from which they retreated by instituting free market reforms. He then indicts what he sees as the failures of U.S. progressives to learn these lessons, claiming they favor “sentimental” appeals over empirical facts. In the book’s final section, he suggests how the U.S. could institute reforms in line with the Libertarianism he favors.

Bayrer’s prose is clear, if not artful, and he argues logically from the data he presents. However, he tends to skirt inconvenient facts. For example, he lauds the privatization of Chile’s pension system but omits that payouts plummeted while administrative costs grew under this reform. The privatized system was modified in 2008 because it didn’t work as promised.

Further, if the FEO had worked “famously” in the 19th century, as he claims, how was society convinced to fix what wasn’t broken? In fact, the abuses of the unregulated market spawned left-anarchist and Marxist movements that threatened to destroy capitalism.

At important junctures in his argument, Bayrer relies on data from books published by the Cato Institute and right-leaning press reports of objective research. Citing the underlying, peer-reviewed studies rather than popular-press or advocacy group articles would have been more convincing.

Despite these issues, Bayrer presents a comprehensive, readable case for his views that admirably resists demonizing opponents. His book provides fodder for the Libertarian wing of the right and will surely cause progressives to sharpen their counter-arguments.

Also available in hardcover and ebook.
.