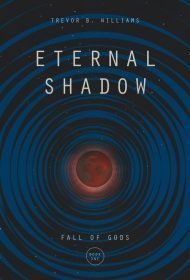 Trevor Williams’ science fiction novel, Eternal Shadow, is a highly technical tale of a humongous entity moving at “unbelievable speed” and devouring planets on its way to Earth.

The plot is reminiscent of hard sci-fi master, Gregory Benford’s 2000 novel, Eater, itself a deepening of Fred Hoyle’s 1957, Black Hole. Both Benford and Williams’ stories open with an anonymous signal, followed by a measured effort by scientists to determine the nature of the entity, discovery of the imminent threat, the political and social reactions to that, and the ultimate saving of the Earth.

Williams successfully updates this “first contact” trope. This time, the main protagonists are female scientists Samantha Monroe and Jennifer Epstein, of Search for Extraterrestrial Intelligence (SETI). They are aided by the self-aggrandizing South African, Muzikayise Khulu, ruthless CEO of Khulu Global whose motives, readers learn, may be questionable.

Unlike Hoyle’s black hole, the entity they are confronting is an Artificial Intelligence, discovered when contact is made. As the story unfolds, a psychotic doomsday Christian cult complicates Samantha and Jennifer’s efforts, with Muzikayise’s assistance, to subdue the threat—and Samantha and Jennifer fall in love.

Solid character development and an intriguing plot make this an engaging read. A veritable cornucopia of knowledgeable, technical and scientific details should appeal to those who like hard science fiction, although less technologically oriented readers may find some of this science tedious (e.g., one passage describes “a quintuple-layered polyimide film that, as a square-shaped parasol sixty meters wide, ensured the primary and secondary mirror were as cold as they needed to be”). Some readers may also weary of extraneous descriptive passages, such as the detailed depiction of Samantha’s hospital room, which do nothing to advance the plot.

However, the intriguing, modernized social and personal threads in the work may outweigh these issues for general fans of the genre. And for those who like plenty of science in their science fiction, Eternal Shadow won’t disappoint.