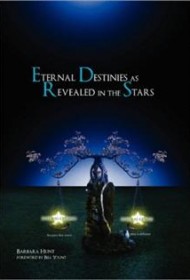 For thousands of years people have looked to the stars for direction, not just to navigate dangerous high seas or lonely desert plains, but to guide them spiritually and practically in their day-to-day lives. In modern times, the scientific study of the heavens is relegated to astronomy, while its ancestor, astrology, has been relegated to the occult and columns in magazines.

For the most part, the zodiac (from the Greek word zoad, which means “ladder”) and horoscopes are a big no-no for many Bible-believing Christians and devout Jews. Yet in her book Eternal Destinies as Revealed in the Stars, Barbara Hunt attempts to take back from charlatans and corner store psychics what she sees as the original intent of the study of stars, arguing that “God’s plan of redemption is displayed through the original forty-eight constellations…[and that] the zodiac signs form the pathway that leads us through the heavens to see [God’s] glory declared.”

For Hunt, there is nothing heretical about the zodiac, and in simple and pointed prose, she presents readers with what is essentially a chart to understanding the beauty of Jesus’ life, death and resurrection. In twelve chapters, the author presents an exegesis of each astrological sign–from Virgo to Leo–and an interpretation of its significance in light of Christian revelation. For instance, Sagittarius, the archer “portrays the triumphant return of the Messiah coming from heaven as a victorious warrior…Jesus is again shown as a centaur which depicts the duality of being both divine and human.”

Though the book could use a healthy copyediting and some footnoting, Hunt’s interpretations demonstrate a poet’s heart. And while her arguments may not convince many theologians that there’s any connection between God and the zodiac, her book makes for an interesting meditation on the sacredness of something that we often take for granted when looking at the stars at night.

Christians with New Age leanings will find this an insightful read.