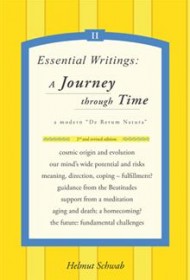 Helmut Schwab’s Essential Writings: A Journey through Time aims to distill the author’s previous essays on topics as diverse as the origin of the universe, human evolution, consciousness, and the search for spiritual meaning. The subtitle, “A modern ‘De Rerum Natura’” is a reference to Lucretius’s work of the same name, which spanned topics within the sciences as well as speculations about mind and soul.

Essential Writings emulates Lucretius’s approach from a time when science and religion were seen as simply branches of philosophy. The project is broad, aiming to explain many of the mysteries of existence and the human condition from the dawn of time into the future, and Schwab is skilled at synthesizing neuroscience, biochemistry, psychology, and philosophy of mind in a way that is accessible to a wider audience. Particularly notable is his economical explanation of the debate on free will.

Schwab’s treatment of politics and religion is nuanced and complex. He shares compelling arguments for agnosticism, if not atheism, but he finds relevant guidance in the moral teachings of religious traditions. His morality is grounded in virtues of personal fulfillment, service to others, and aesthetic appreciation. Readers may object to his implication that violence is endemic to (but certainly not exclusive to) Islam, yet he also demonstrates empathy for the plight of Palestinians.

Essential Writings is a niche book, with primary appeal for academics in philosophy or similar fields. It is overly ambitious in seeking to describe and justify a worldview about so much of our existence in so short a format, and the passages are too brief to be as effective as they could be. (Note: Schwab’s longer essays are available on his website.) In addition, it occasionally feels as if the author added threads of thought, ad hoc, to unrelated topics.

Despite such drawbacks, this project has commendable moments of real success grappling with complicated ideas that will interest its specific audience.