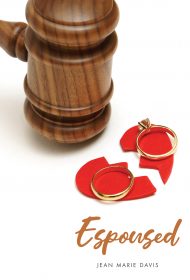 Jean Marie Davis’ Espoused is a comedic yet tender fable about love and the nature of commitment.

In the novel’s world, the law requires those in a first marriage to uncouple after 15 years. Partners who wish to stay together must endure a lengthy legal process to espouse.

Tom and Sara Healy hire hard-working lawyer Gwen Stevens to fight for them, but things go badly in court when the Healys’ judge turns out to be the woman from whom Gwen’s husband Dennis uncoupled years before. As Gwen deals with her husband’s failing health, the Healys endure a trial separation while couples around them navigate their own uncouplings and, in doing so, learn how to be honest with themselves and each other.

The story skips among the points of view of a large cast of characters—not only that of Gwen, the judge, and the Healys, but also two other couple friends and their children, who are watching their parents’ struggles and navigating their own experiences of attraction. The big cast prevents readers from getting too close to any one character, but the range allows a study of the book’s theme from several angles.

The premise grants Davis great range for parody, with sessions of uncoupling counseling and the social stigma of going against the “natural” way of relationships. In the end, the uncoupling rises above a mere gimmick when characters eventually admit what they really want—something the younger characters recognize earlier than the adults.

The prose is light and smooth, and so, in the end, is the emotion. Chapter endings step back into satiric or formulaic territory rather than diving deep into the complex terrain posed by the characters’ dilemmas.

No matter. Those looking for an engaging, effortless read that poses real questions about how romantic love changes over time will enjoy Espoused.