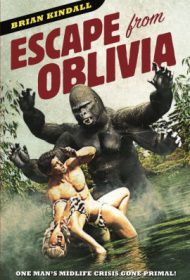 Escape from Oblivia, by Brian Kindall, imagines one man’s journey from mundane midlife crisis to the magical reality of boyish fantasy.

Will Kirby— novelist, restless husband, and stay-at-home dad—haunts the library researching his hero (and the subject of his next book) Dick Zag, 20th century pulp writer and rugged adventurer. The voluptuous lead librarian, Roxanne, is Kirby’s most adoring fan, but another employee catches Kirby’s eye: Martine. Sexy, exotic, and aloof, she’s like something right out of a Zag story.

Kirby’s project implodes after learning the real Dick Zag was no adventurer, but merely a delusional milquetoast. Additionally, Kirby’s obsession with Martine is eroding his marriage. Avoiding reality, he escapes into his fantasies, where he’s abruptly transformed into the protagonist of a pulp adventure story: In this story (comprising the book’s last third), he washes ashore with Roxanne and Martine on the island of Oblivia, where he becomes the champion of a tribe of sex-crazed amazons, defending them from sea monsters and man-eating apes. But Kirby isn’t the first man to land in Oblivia, and a mysterious predecessor shows him that this life of so-called adventure isn’t everything it’s cracked up to be.

Escape from Oblivia is a comedy about the superficial mirage of “masculinity” and the deeper meaning of manhood. Kirby is characterized by calamitous decisions, which renders him relatable and, sometimes, unlikable. Kindall is a polished writer, capable of wringing ample comedy from the self-inflicted schadenfreude of Kirby’s choices, but often the reader wishes Kirby would grow up. The ending implies that he does so, but does little to clarify what in the story was “real” and what was “fantasy.” That’s a bold choice by Kindall, which some readers will find suggestively open-ended, while others find it maddeningly indecisive.

Readers are sure to enjoy the journey, but ultimately, the polarizing ending detracts from Oblivia’s considerable achievement: its hilarious portrayal of masculinity in crisis as something both pathetic and profound.