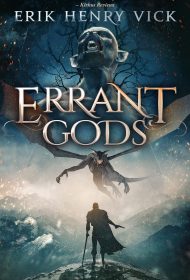 Chronicling a Western New York police officer’s desperate attempt to rescue his wife and son from a duo of seemingly immortal serial killers, the first installment in Erik Henry Vick’s epic Blood of the ISIR saga is an audacious fusion of crime fiction, realm-hopping fantasy, and Norse mythology.

Seven years have passed since New York State Trooper Hank Jensen crossed paths with a couple suspected of depositing hundreds of corpses—some partially eaten—in a cave. The strange, otherworldly duo escaped but not before killing Jensen’s partner and cursing Jensen, leaving him in constant pain and disabled. When his wife Jane and his 12-year old son Sig don’t return from a night of trick-or-treating, Jensen realizes too late what has happened. The “Bristol Butchers,” as the man and woman were called by the media, have finally made good on their threat to take Jensen’s family away from him. As he follows clues that lead him to a deep cave, he finds himself in another world.

The only issues here are minor: There’s a scene early on where reprehensible racist language is repeatedly used in a gratuitous manner—the slurs could have easily been removed without changing the story—and there are sequences in the latter half of this massive adventure (700+ pages) where the author temporarily loses sight of tension level and slips a bit too heavily into world-building and backstory, which negatively impacts the narrative momentum.

But overall, this is a fluidly written, deftly plotted story that will surely entertain anyone who enjoys intelligent and ambitious storylines. Mixing elements of crime fiction and fantasy, Vick utilizes hard-nosed detectives, twisted serial killers, Nordic deities, wendigoes, dragons, etc., to create a singularly unique read. Comparable to Stephen King’s Gunslinger sequence (which is referenced in the novel) in terms of genre-blending originality and sheer creative courage, Vick’s latest is a page-turning storytelling tour de force.