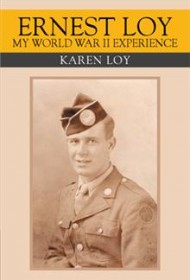 Trying to preserve her father-in-law’s World War II recollections, Karen Loy has gathered what information she can and published it in Ernest Loy: My World War II Experience.

It’s a wonderful idea from a family perspective and a testament to her respect for Ernest Loy, who survived the Battle of the Bulge in the war’s closing months.

Karen Loy, a retired registered nurse, explains that her father-in-law doesn’t talk much about his war experiences. So by necessity, the stories, and book, are very brief. Loy is also more than 90 years old, which could be a factor in the narrative’s brevity. The author notes that she also gleaned some information from family members.

The book is mostly a recounting of where he was stationed, with a few tidbits of color – such as him getting frostbite in France — thrown in. There’s no depth, few details, and no historical context.

More background on Loy might have helped, as we know little about him. The book starts in the early years of WWII and mentions that he had quit school at 16 and took a job in a grocery store. After he turned 18 in 1942, he was drafted and shipped to Camp Dodge in Iowa. Loy was eventually deployed to Europe, undergoing glider training in England, then was shipped to France. He was an ammunition bearer during the Battle of the Bulge, where his unit lost more than half its men. Once the war ended, he returned to the United States and married.

The book runs only 35 pages and features an extremely large typeface. Near the end, the author includes several pages of conversation with Ernest about his war years. The book would have benefited from weaving those comments into the earlier narrative.

Still, with the lack of information available, Loy has managed to document Ernest’s military service, something his family will appreciate.