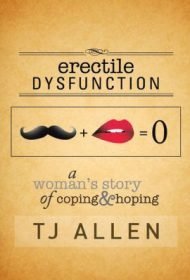 TJ Allen’s Erectile Dysfunction is a brief, venomous screed against a husband who cannot perform sexually.

In these pages, the author blames her partner for his lack of sexual ability to satisfy her lusty appetite, along with disdain for his obesity. “I reminded him that he had signed on to be human toy for me of which he failed,” Allen writes, chronicling a decades-long marriage told in short chapters. Together, the incompatible couple moves through parenthood, failed marital counseling, the death of parents, a last-ditch effort to save their sex life through pharmaceuticals and toys, and finally bitter resignation of their situation.

There’s plenty of fodder for a realistic look at a marriage as it stales with age. And there may be readers who see their own loveless unions and frustrations in Allen’s story. But for a wider audience expecting insight into a legitimate issue, her one-sided anger and attack mode grows tiresome. She shows rare moments of understanding that her husband may be suffering and ashamed, but they are fleeting. “It must suck to be him,” she writes.

Early in the story, Allen writes of her goal to conceive, and her demands for his performance only grow. Again, there’s opportunity for emotional depth and even humor as sex becomes duty in the pursuit of a baby. But she shows no affection for the man who will become her child’s father, only dismissal. “Having to have sex everyday was exhausting to him. But I didn’t care. My goals were too important to me,” she writes.

The author’s talk of her own sexual prowess also seems outsized, like some throwback to Penthouse “Forum” fantasy. “Good thing that I can have 10 major orgasms within three hours and that I had football to keep my mind off his helplessness,” Allen writes.

Ultimately, the book is little more than unpleasant venting and will prove disappointing to those expecting a serious look at the issues the title implies.