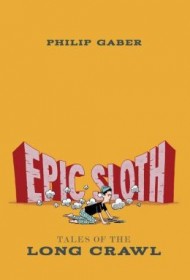 A wry, ruefully funny voice distinguishes this collection of stories and (a few) poems.

Ignoring the hoary creative writing program advice to show rather than tell, author Philip Gaber frequently allows first-person narrators to inform us of exactly what’s on their minds. Drinking, drugs, bad childhoods, dysfunctional families, and women sick of their terminal lack of ambition generally top the list. The cold winds of middle age also chill their hearts, as youthful slacker-dom begins to look like permanent loser-dom.

This might not seem like fertile ground for humor, and some of the stories are indeed quite sad. But Gaber is so honest and exact in his charting of difficult relationships and unsettled souls that sometimes you have to laugh, as when the narrator of “a chronological complicated story” (all titles are lower-case), describes a tense moment in a near-argument with his girlfriend: “Then she asked me one of those questions that make almost every guy like me squirm. ‘What do you want to do for the rest of your life?’”

Most protagonists are male, but Gaber’s female characters are fully fleshed and convincing as they harangue their mates or parade their emotional instabilities. When they speak directly to the reader, as in the story entitled “the secret of her bloom,” they tend to be tougher and tarter than the mournful men. The African-American characters also have their own authentic voices and points of view.

The poems are merely OK, and although the few more fantastical stories are interesting, Gaber’s principal gift is for sharp, true-to-life dialogue and characterizations. People failing to get a grip on life is a rich subject, and this talented author would be well-advised to take his “encyclopedic knowledge of the angry and the marginalized” and delve into that theme more intensively in a novel. Until then, however, this atmospheric offering provides much to appreciate.