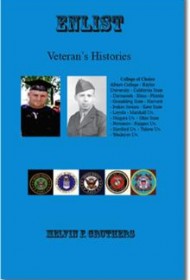 Author Melvin F. Cruthers tells readers of Enlist that his purpose is to convince high school students to consider a stint in the military. A World War II veteran who lost his right leg above the knee in battle, Cruthers tries to accomplish this by presenting the stories of 31 veterans representing all branches of service and most U.S. military engagements of the last 70 years. So we have veterans who were at Pearl Harbor, fought on Iwo Jima, or served stateside in the National Guard.

This wealth of experience, however, doesn’t translate well into print. Cruthers takes their stories – gleaned from interviews or written accounts (he doesn’t specify) – and puts them into third person, taking much of the life out of them. Most of us have heard relatives tell stories from their days in the service; they’re usually fascinating, frightening or funny. The stories here, though, tend to be mostly flat. We get a few flashes, such as Stanley Talarcek’s reminiscences of fending off Japanese suicide boats and planes in the Pacific Theater. But mostly, the recollections are of incidental events and experiences relayed with little emotion. For example: “The longest he stayed on any landing zone was about two months. Normally he stayed a month or five weeks. Then he would be moved to another landing zone. If he wasn’t supporting an artillery group he would be supporting infantry.”

Also worth mentioning: Enlist could use an editor. The author has problems with tenses, noun-verb agreement, and random capitalizations. The word “there” is routinely substituted for “their.” To further confuse the issue, Cruthers sometimes slips from third person into first person, sans quotes (“They loaded us on a truck …”).

Despite the problems, Enlist conveys a sense of life in the military. For longtime students of history or military scholars, the book might contribute to their knowledge. But for teens coming out of high school, Enlist could be something more.