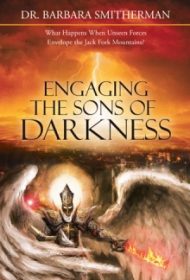 This Christian fantasy, set in the scenic Jack Fork Mountains of Oklahoma, revolves around a potentially apocalyptic battle between good and evil where the inhabitants of the rural community of a town called Evansville are the unknowing pawns in a spiritual war that has been fought for millennia.

As the novel begins, the town of Evansville is likened to a “person in the terminal stages of a deadly disease.” Many of the residents are succumbing to various forms of evil. For example, storeowner Jack Sims attempts to save his struggling business by selling liquor and becomes entangled in alcohol’s grip. Sheriff Hank Wilson and moonshiner Nolan Rollins let greed irrevocably change them. But the appearance of a young pastor—and the unification of a group of true believers—push back against the “unseen forces” of evil to create a battlefield on the physical and spiritual planes.

The thematic profundity is unarguably strong, and the plot is intriguing. Unfortunately, the novel suffers from a few flaws, some minor, others more significant. On the minor side: at one point, the author indicates that a biology textbook states that “everything on earth had just evolved from some higher life form.” It’s hard to know if the error was accidental or intentional.  Also, the text is peppered with grammatical errors, including mistakes in spelling and word usage, such as “…his bazaar [sic] behavior,” “…she had lost conscientiousness[sic],” and “Green slim [sic] was running into gutters…”

Finally, and more importantly, while the writing is fluid throughout, the narrative suffers from an overall lack of tension and description; the characters and various locales are conspicuously cardboard.

Such flaws impact reading enjoyment. Nonetheless, fans of faith-based genre fiction may find some rewards in this journey into the scenic mountains of Oklahoma and the spiritual battle between a group of devoted prayer warriors and demons bent on their eternal damnation.