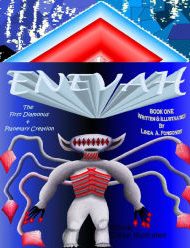 In Enevah, the first of a science fiction adventure series, a family leaves their idealistic life behind to travel between worlds on a quest to save all worlds.

Marah and her young son Micca lead a happy life in Australia, until the day their pets chase a bandicoot that leads all of them through a tree portal into the strange, beautiful paradise world of Enevah. The pets, and even the bandicoot, are transformed into humans and soon learn from the inhabitants of Enevah that their arrival wasn’t coincidence. They are there to train in combat and retrieve various objects that will save all planets from being conquered by an evil lord. When Micca’s first mission goes wrong, Marah must defy her own mission to save him instead.

This book has a promising opening with compelling character dynamics, a fast-paced beginning, a lovingly crafted fantasy world, and the unique point of view of a bandicoot-turned-human.

Unfortunately, this is soon followed by lengthy and overly detailed exposition, a typical problem throughout the book that often slows the story down. One character describing his background, for example, gives more detail about his mother’s funeral arrangements than the emotional impact of her death.

Character dynamics also fail to develop fully. The relationship between the humanized Barat the bandicoot and Missy the dog is initially interesting due to their contrasting personalities. But as readers witness Missy’s constant verbal and physical abuse towards Barat, they will wonder why he has feelings for her.

Despite a villain being mentioned, the story lacks a real antagonistic force; the plot consists mostly of the characters encountering and fighting various monsters. There are also several instances of poor editing. Particularly distracting is the constant random use of italics,  creating a tiring reading experience.

Readers of young adult science fiction may enjoy this book for its positive merits and creativity, but most will find the superfluous prose and lack of real character development disappointing.