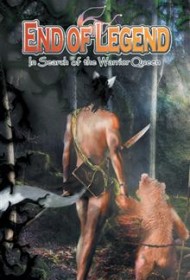 This well-conceived, interesting fantasy story waves a glaring red flag before readers even begin the tale. The name of the author on the spine (Damon Willis) is different from the name on the title and copyright pages (Damion Willis). It’s a clear indication that the book hasn’t been produced with the attention to detail necessary for a flawless read.

And that initial impression is confirmed as readers jump into End of Legend. Dozens, possibly hundreds, of grammatical and typographical errors detract from what is an otherwise compelling story.

As End of Legend opens, Louisianian and part-time bartender Nathan is content with his life: He has a girlfriend named Ashley and a trusty canine sidekick called Bishop. But when a portal opens in his bedroom and armor-clad intruders abduct Ashley, he follows them into a fantastical world where he has doglike ears and a tail! He finds himself in a seemingly endless forest filled with wonder (migrating lakes, sentient creatures, etc.) and danger. After three years wandering about the Wild Woods, he reaches some semblance of civilization, only to find that his girlfriend is now a warrior queen!

While the author should be applauded for attempting something innovative, the use of a track list – essentially, songs to complement the storyline – not only doesn’t work but detracts from the reading experience. Inserted into the story at various points are notices such as “[Track 15],” where the reader is evidently supposed to listen to a specific song.

Another odd decision was not only to include illustrations (that don’t significantly enrich the experience) but also to use some images more than once in the same chapter. Deliberate or not, it comes across as yet another oversight.

This wildly imaginative fantasy is an exceptionally well-conceived story, but because of the plethora of easily remedied errors, End of Legend is memorable for all the wrong reasons.