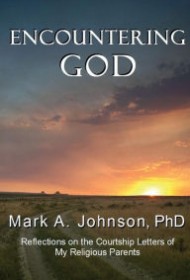 In Encountering God, Mark A. Johnson shares his parents’ courtship letters, which “revealed the breadth and depth of the spiritual joys and challenges that invigorated their lives as Christians.”  With the Great Depression behind them and war on the horizon, a humble farmer and a schoolteacher show us an old-fashioned way to fall in love long distance.

Walter met Margaret once in 1937. He lived in Colorado; she, North Dakota. After 13 months of letter writing, the two were married. Here, we witness the blossoming of their love through their letters.

Throughout, Johnson offers historical context, noting, for instance, that a particular letter was written on Armistice Day and that “Heifers sold from $7 to $10.25,” at the time. He also comments on life with his parents (“Hearing Mom sing…was pure joy”) and encourages readers, in end-of-chapter “A Glimpse Back” questions, to contemplate the issues they struggled with. For example: “In her reflection on war, Margaret longed for freedom from greed and hatred. When you contemplate world conflict, what do you long for?”

Walter and Margaret’s manners stand in sharp contrast to what we see today; their pure innocence and deep respect for one another and God is endearing. But their story is embedded in a narrative that lacks a clear sense of purpose. Johnson’s historical tidbits help anchor the story in time, but his interspersed comments about his parents feel random. Meanwhile, the “A Glimpse Back” questions read as an afterthought rather than something integral to the overall theme of the book. Given no real motivation to work through these questions, readers may find themselves skipping them altogether.

Ultimately, the book feels disjointed. Given the jumble of ideas presented, readers are on their own to decide what to take away from the experience.  It does, however, offer a loving portrayal of Walter and Margaret. Christians searching for godly examples of courtship may appreciate their story.