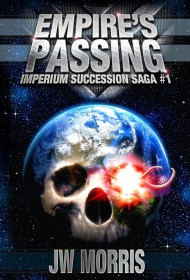 “Space is big. Really big,” wrote Douglas Adams in his classic Hitchhiker’s Guide to the Galaxy. New science fiction author J.W. Morris understands the vastness of space and ably conveys it in this fast-paced, futuristic novel, Empire’s Passing, the first volume in his Imperium Secession Saga.

The grand scope of Morris’s tale is clear from the start: It’s the year 2937. Earth has been destroyed by the greedy Goth Alliance, which is now targeting the small but strategically important planet, New Meyer, keeper of several important space jump chutes that connect key players in an ongoing interstellar war. It’s up to Michael Landsman, Duke of New Meyer, to protect those chutes, his planet, and maybe the fate of the interstellar government, the Imperium.

Epic battles alternate with an intriguing storyline about Michael’s formidable foe, the High Priestess of the Goth Alliance, who feeds off the sexual energy of humans. She’s a powerful villain, and it’s too bad her story sits mostly apart from Michael’s, at least for now. The focus, instead, is on Michael’s alliances and the high-tech, experimental weapons he wants to employ.

Using military language, Morris conjures up massive space battleships and asteroid-pulling tugs, and often anchors his heroic fights for control of the Imperium in Earth history. Calling on the parallels with the rise and fall of the Roman Empire, for instance, Morris offers some familiar and much-needed guideposts in an immense and sometimes overwhelming interstellar landscape.

While Empire’s Passing tells a complete story on its own, the characters and relationships take a backseat to the action, and thus feel introductory. Future volumes will no doubt afford the opportunity to develop these elements further. For now, Michael’s courageous, seat-of-his-pants response to interplanetary emergencies will certainly satisfy many space saga fans.