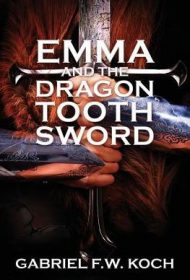 In Emma and the Dragon Tooth Sword, a fantasy geared toward readers aged 10 to 12, author Gabriel F.W. Koch dives right into the action and keeps the rapid narrative pace running throughout.

Koch begins with a description of a grisly car accident. Ten-year-old Emma mysteriously survives the brutal wreck that claims her father’s life. She is inexplicably extricated from the car before it explodes, and has visions of a “huge, indescribable creature” who speaks to her in comforting tones before she passes out.

Four years later, the weight of that vision returns when Emma finds a weathered book from the 16th century in her local library detailing the exploits of Dragon Sanglant, a pirate who ruled the seas for a dozen years and wielded a magical sword made from a dragon’s tooth. Emma becomes obsessed with finding the sword to help extricate her family from poverty.

Following the clues from a map found in the book, she eventually locates the sword and discovers that it’s a gateway to a “New World” that hosts elves, marauding pirates and the dragon who saved her from death. There, Emma must make a stand against the pirate Dragon Sanglant to restore balance to the New World and find a route home.

Koch’s straightforward adventure relies on fast-paced action and dynamic descriptions. For example, Emma’s trial as the new Swordbearer after she arrives in the New World features vivid monsters and moving tests of her strength and will. Koch’s direct, engaging writing style makes up for the occasional sense that the characters are underdeveloped (the adults, for example, seem mere one-dimensional background figures, and Dragon Sanglant is a broad villain, rather than multi-dimensional), and the background and context are somewhat vague.

Such shortcomings aren’t likely to deter the book’s target audience, however. Overall, Emma and the Dragon Tooth Sword is a fun and breezy outing for young readers just starting their journey into the genre.