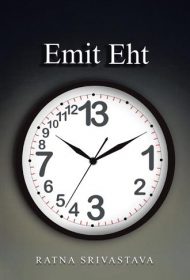 In Ratna Srivastava’s novel, Emit Eht, a recurring nightmare keeps a young woman from sleeping well, kicking off a series of events that eventually involve a freak apocalypse.

Eva Schmidt hates everyone, except her kindergarten students. She hates her coworkers, her neighbors and their loud sex, strangers she meets, and even her ex, Alex, whom she nonetheless considers her only friend. Her irritability is either enhanced or caused by her exhaustion, yet whenever she tries to rest, she’s plunged into a nightmare where she’s scaling a tall mountain but never able to reach the top.

While they’re on the self-fueling flight, Earth experiences a series of natural disasters, making it impossible to land for weeks. If this weren’t chaotic enough, a professional assassin onboard informs Eva that she’s heir to the Illuminati, the crew is forced to repopulate Earth, and two teen siblings onboard admit to rampant incest.

This random string of bizarre events reads like an odd Mad Lib story, with the same tenuous connections. Additionally, the characters are difficult to relate to (Eva repeats the catchphrase “Go, die [sic]” on nearly every page). And the dialogue is a strange mix of old-sounding phrasing, (“How I wish I were a scientist too [sic]”) with ultra-modern words (i.e., “Bruh” and “LOL”). The result is an unsatisfying read overall.

While there’s potential in a story that places a kindergarten teacher among the rich, powerful, and accomplished as the world is ending, this novel requires revision to ground readers and coherently connect its disparate elements.