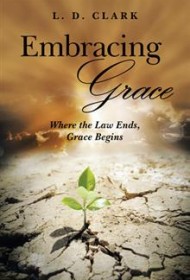 L.D. Clark is a self-identified ordained minister who grappled with his own spiritual journey and dug into his soul to provide a guidebook that he feels will be of value for those on similar journeys.

In Embracing Grace, his debut work, Clark attempts to tackle the Christian notion of Grace: What is it? Why is it important? Does Grace override the Law? His thesis is well-stated and he steps out with an oft-debated concept by explaining that the New Covenant (New Testament) completely replaces the Old Covenant (Old Testament).

While his proposal is not spurious, his execution of proof falls shy of the mark. Clark uses the Bible as his source material, and, in fact encourages readers to keep a Bible by their sides as they read his work. But careful reading shows that he has fallen into a common trap of quoting exactly the verses that prove his point while ignoring verses that contradict his thesis.

For example, in proposing that good works are unnecessary for those who have faith, he ignores the New Testament book of James that says faith without works is dead. In addition, his philosophy that New Covenant believers are exempt from Old Covenant laws is directly contradicted by New Testament Gospel quotes from Jesus. Other examples of this dichotomy are easily found in this work.

Chapters in this volume have a concluding summary list of “Think on These Things,” a welcome addition, and the author is obviously sincere in his opinion. He becomes repetitious, however, in presenting his various proofs, on one occasion using the same exact Bible story and anecdote.

Those who enjoy reading alternate philosophies may enjoy this book, as would those who already espouse the author’s point of view. More skeptical readers, or those knowledgeable in authoritative Christian theology, may find that this work leans more toward the fringe.