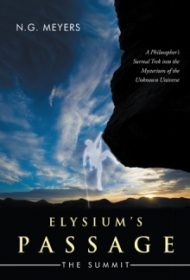 A fusion of philosophy, fantasy, and spiritual speculation, N.G. Meyers’ novel is comparable in theme and tone to Carlos Castaneda’s landmark books that revolve around the author’s metaphysical journey into the spirit realm with the help of his teacher Don Juan, a Yaqui shaman.

In Elysium’s Passage, the first installment of Meyers’ Elysium saga, the narrator is James Phillips, a London philosophy professor. Disenchanted with his existence, Phillips decides to travel to Chile during a university holiday and climb to the summit of a remote mountain in the Andes. After a fall nearly kills him, his spirit embarks on a journey that ultimately leads him to his divine Self and existential enlightenment.

Ever the skeptic, Phillips at first finds his “new reality” hard to believe. While his comatose body is back in a London hospital bed after a helicopter fatefully spotted it while flying overhead, his essence is at the Summit existing in a log cabin with two enigmatic beings, Eli and Mo, who are teaching Phillips about the true nature of the universe and his unique place in it. Mind-blowing statements and speculation (“…everyone is a non-physical thought form conceived in the Mind of God, preserved for all eternity because God’s thoughts never die…”) ultimately lead Phillips to accept his situation and, at novel’s end, he’s ready to reenter his body.

This is a deep read—in other words, a novel not to be tackled quickly. Because of the plethora of abstract ideas and the almost complete lack of any significant action, pacing suffers mightily in some spots. Additionally, the text contains many grammatical/typographical errors (“Since it I couldn’t find it…”; “I really should to do this more often,” etc.).

Those seeking nonstop action and adventure will want to seek their literary kicks elsewhere. Readers who enjoy their literary escapism mixed with a heaping helping of philosophy and allegory, however, will find Meyers’ journey up the Mountain intriguing—and possibly even life-changing.