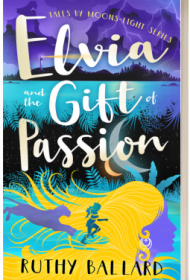 In Ballard’s third book in the Tales by Moons-light series, a ten-year-old girl who feels imprisoned by overprotective parents longs for adventure.

On a wildlife safari trip her mother won, Elvia sneaks away, is chased by a lion, and escapes into an outhouse. There, she’s pulled through a space-time tunnel and lands on a distant planet named Urth with two moons. She’s met by Lacie, a fashionista “Uppy” (Urth person who guides children from Earth, called “findlings”). Lacie has been assigned to help Elvia complete an unknown mission.

Lacie explains that they will be going to an island to shop for clothes for Elvia. Because part of the journey is by submarine, Elvia must pass a scuba diving class taught by an amusing, straight-talking instructor. His undersea physics lesson includes interesting facts about buoyancy, ballast tanks, and diving bells.

As the story evolves, Elvia enjoys many adventures, which she finds especially delightful, having been cooped up for so long by her parents. She befriends a former findling named Rats. And when Rats is in mortal danger, Elvia jumps into action.

Meanwhile, her parents are overwrought by her disappearance and surrounded by swindlers promising to find her (or her bones). Eventually, Elvia, whose sister died of cancer years earlier, understands their pain. “My poor parents! Think of it! First they lost my sister, and now they’ve lost me…” She yearns to return home.

Ballard’s story isn’t perfect. Several subplots feel thin, one is overly complicated, and it can be challenging to keep track of all the characters.

Still, Ballard’s writing is lively and fun, and her character-building is a marvel; she has created rich, imaginative personalities. When Elvia is snuggled into new pajamas, for instance, she tells Lacie she feels like the color “Warm Ginger Cookie.” Additionally, Ballard weaves fascinating science facts into her narrative.

By the time readers reach the story’s conclusion, full of surprising gems of irony and fate, they will be spellbound—and eager for another Urth tale.