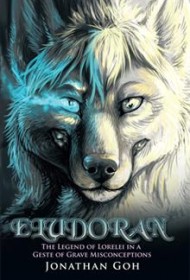 Dedicated to (and obviously inspired by) J.R.R. Tolkien, this shelf-bending fantasy poem—about a heroic female fox and her epic journey of self-discovery—is written entirely in rhyming couplets.

Set in the anthropomorphic realm of Deleran—populated by communities of foxes, wolves, bears, weasels, etc.—the storyline essentially revolves around two main characters: Lorelei, a vixen princess, and her cousin, Malachi, a wolf. Lorelei has lived a relatively idyllic life within the magical confines of Eludoran, but as she reaches maturity, she begins to realize how much her father, Arulaine, misunderstands and under-appreciates her.

Still grieving for his lost mate—who died giving birth to Lorelei—Arulaine’s sorrow becomes a weakness as enemies slyly seek to enter Eludoran and enslave its residents. As Arulaine’s power—and judgment—deteriorates, Lorelei discovers he is planning on marrying her off. She sees no other option than to leave the safety of Eludoran. Alone in a dangerous world, she soon becomes enslaved by the ruthless ursine king Bloodfang. Meanwhile, her cousin Malachi sets out to find his beautiful cousin and return her safely to the glades of Eludoran.

One of the biggest challenges in writing a story in rhyming couplets—especially a work this long—is not only the potential for monotony but also that the format’s strictures will degrade the narrative flow and ultimately the tale’s thematic power. With Eludoran, the author has written a highly imaginative story that flows seamlessly from beginning to end: no small feat for almost 900 pages!

The story’s main problem is its lethargic pacing; the storyline frequently goes off on tangents exploring various legends or backstory. While these vignettes enrich the mythos surrounding Eludoran, they kill momentum and create a frustratingly slow and serpentine reading experience.

That said, this is an ambitious and highly impressive undertaking. Fans of Tolkien will be delighted to find more than a few subtle references to Middle-earth sprinkled throughout the story: “Won’t we, my precious?”